This collaboration between 2 friends continues below … first Karen’s poem response to the image I gave her, followed by her image and my poem response. 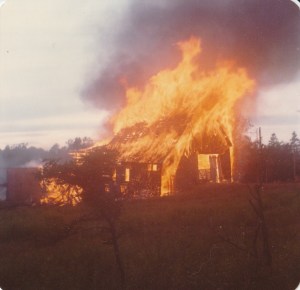 And here’s Karen’s poem in response:

He piled up her letters to him,
together with photographs, favourite novels,
diaries he’d penned, poured on lighter fluid.

How she and he melted in Rome and Paris,
fluttered like moths into the night, flames twisting
into ghosts, exorcised as smoke;
words re-written as ash,
while the crackling edifice collapsed.

Years later, loss hits him like sunlight
through magnifying glass
onto the crumpled sheets of paper
where he’s written his heart.

What he would give to go back,
unstrike the match, save one photo,
frame the face he can no longer picture.

Note from Karen: Photo by Elly Nobbs (Kodak Instamatic 1978) I asked Elly about the story behind this photo. In the 1960s her parents bought the adjoining small farm which had belonged to an ancient brother and sister. The barn was full of stuff of all sorts – old magazines etc…nothing ever thrown out. As it was gradually falling down it became dangerous so in 1978 Elly’s parents had the Fire Department come and burn down the barn.

This is the image Karen gave me (one of her own photos); click on the shadow to enlarge it — 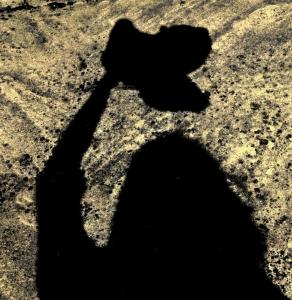 And here’s my poem that I wrote in response —

The shadow by my elbow
says, Never mind. A gun hides
under wrapping paper.

It’s up to me to use,
thus saving
all the other party goers.

They have no clue.
I grip the thing, contemplate
its heaviness; hide

it behind, in the waistband
of my jeans like the FBI
agents do on Netflix.

Resigned that the plot calls
for this protagonist
to shoot her mouth off, roaring

Note from Elly: Yup, my poem was a dream I had… watching too many lawyer shows…