Traditional triolets have strict rules  , which even when I try to follow, I veer away from – sometimes a little, sometimes a lot.

The triolet is a short poem of eight lines with only two rhymes used throughout. The requirements of this fixed form are straightforward: the first line is repeated in the fourth and seventh lines; the second line is repeated in the final line; and only the first two end-words are used to complete the tight rhyme scheme. Thus, the poet writes only five original lines, giving the triolet a deceptively simple appearance: ABaAabAB, where capital letters indicate repeated lines.

And here’s the picture of a pretty West Coast bird – which you’ll hear more about at later in this post. Promise.

But let me digress: A couple of years ago I came across an interesting essay  about poetic forms “The Lure of Tradition” on the web page of Canadian poet Sandy Shreve

I like her flexible philosophy on form. She says  –

… I see the elements for any extrinsic form more as guidelines than prescriptions. Sometimes I abide by all elements; sometimes I don’t – depending on what it is about the form that attracts me,  what I think I can achieve, or what might be most important for the particular poem I have in mind.  And, on what I think will make writing it both a pleasure and a challenge.  Apart from  finding that ignoring or breaking rules can be as effective as following them, I suspect there are any number of reasons why writers, historically and today, try new things with established traditions – or subvert tradition entirely….

And then she goes 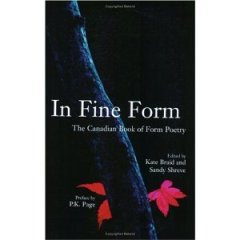 on to give some interesting examples from her own work.

I ended up buying In Fine Form – the Canadian Anthology of Form Poetry – editors Kate Braid and Sandy Shreve  and I highly recommend it.

I had previously bought this other book on forms (by Norton) – it’s well-known and a good book and it’s cheaper – but I continue to enjoy the Canadian anthology for its examples and for the introductions to each form.

I was quite taken by the book and feeling bold  one day messaged Sandy on Facebook and told her so. And asked to be her FB friend.

Last fall, Sandy generously sent me a copy of her recent chapbook  Level Crossing  which is a sequence of 12 triolets published by The Alfred Gustav Press, a “micro-publisher” from Vancouver – and I plan to (right away!) subscribe to their next edition.  It’s a steal of a deal at only $10 for 3 chapbooks (the next deadline – for series 10 is coming up very soon – April 1st). The chapbooks are hand-produced by The Alfred Gustav Press “with the help of clone, laser jet, blade, steel edge and colour pencil.”

In the afterword, Sandy talks about how she played with the form:

…So I gave myself over entirely to variations. Sometimes…refrains became faint echoes, bouncing off whatever lines they chose. Other times I stuck a little closer to the rules. In the process I realized what I love about the triolet is how much freedom its tiny scaffolding supports, how far you can travel without fear of collapse. How it insists on precision, sharpens focus…

She said I could show you one of her poems so here’s one from Level Crossing . Here’s one of my favourites:

LOVE SONG OF THE VARIED THRUSH

The thrushes are singing again. Sharps and flats
rise from the firs, then subside – as if the trees were filled
with minstrels tuning their instruments. Once a year
the varied thrush brings back this woodland chant
pitched to unravel a world of heart-broken laments.
Incantations roam the woods like lovers lost in a maze
of sharps and flats, rising and subsiding with the firs
waving their arms, like batons, to the music.

My book at Goodreads 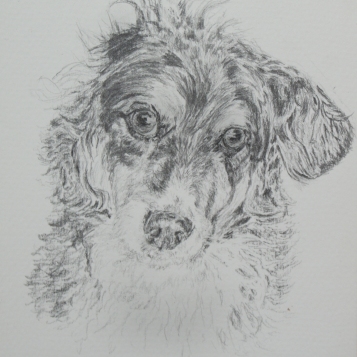 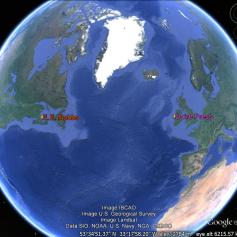 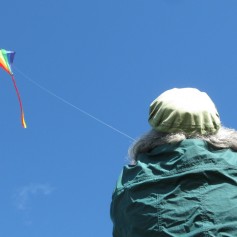